The ancient Bulgaria with the most ancient European civilization

back to tours
Thracian ruler 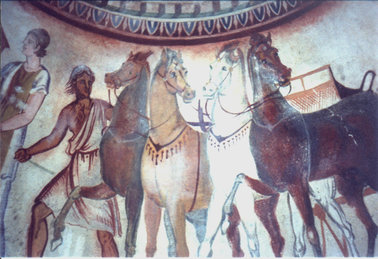 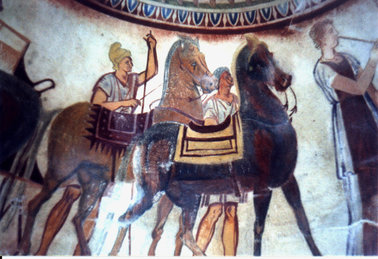 Our tour begins with a visit to Bulgarian capital SOFIA. Today we will visit Boiana ancient church, where we can see the wall paintings of Bulgarian rulers of XII century , i.e. the start of Bulgarian revival. After that we hope to have enough time, during the day to visit two museums with unique archaeological finds. THE NATIONAL MUSEUM OF HISTORY: This is the biggest treasure-house of historical records and artefacts, some of which are more than 50 000 years old, of the Bulgarian land. There are hundreds of objects of scientific and artistic value dated from the prehistoric, the antique and the medieval periods as well as from the time of the Bulgarian revival. Works of the everyday life and material culture of one of the most ancient civilisations including the most ancient hand-made golden articles more than 6 thousand years old are exhibited there. In the show-cases we can look at the unique Thracian treasures from Rogosen - 165 pieces silver utensils, and the famous golden treasure from Panagiurichte. Night at Sofia town hotel.

Today we travel / 200 km / to the ancient Roman town of Hisar. Where we still can see the ruins of ancient roman fortress. It’s known that the Roman rulers very often founded their towns close to mineral springs. The town of Hisar is such a place, with more than 40 mineral springs in his region. But before the Romans the Thracians have done the same, and we can visit / very close to the town / a Thracian sacred temple, dated more than 2200 years ago. This is one of the newest archaeological finds in our country. There is another interesting archaeological site, namely the Zaba mogila in the little town of Strelcha. This is a big ritual mound more than 20 m high with a Thracian tomb-mausoleum inside, over 2500 years old. Nowadays Hisar town is a archeological reserve . There is the antique town of Diokletianopolis. The best preserved fortress on the Balkan peninsula, built on the place of an ancient Thracian settlement with a Thracian heathen shrine and spa. The fortress was erected some 2000 years ago. The archeological excavations revealed family houses and public buildings, amphitheatre, barracks, 2 public baths, 9 basilicas, many tombs with wall-paintings and tessellate flooring .Visit the archaeological museum in the town too. Dinner and night at local hotel.

Today we'll visit / 60 km / the old town of Plovdiv, one of the most ancient towns in Europe. There was a settlement where contemporary Plovdiv stands more than 6000 years ago. The world-famous sights a tourist should see in Plovdiv are: The Antique theatre, antique stadium, the fortified walls with turrets, the Roman thermal baths, and the multicoloured tessellate pavements preserved in their proper place. The ancient town district preserved in its original appearance with buildings from the National Revival in traditional Bulgarian architectural style, with the almost fully preserved Roman amphitheater, ruins of fortified walls and other remains some dated 3500-2500 years ago. The Museum of Archaeology: one of the richest in the country. There the visitor can see collections of prehistorically utensils, golden and silver decorative items, pectorals and arms from the time of ancient Thracians, the famous treasure from Panagiurichte (also Thracian in origin), a big numismatic collection. Dinner and night at local hotel.

After breakfast we leave Plovdiv and we head to Kardjali town /100 km/ , where we’ll see the newest archaeological finds in Bulgaria, related with the most ancient culture in Europe – The Thracian one. We’ll visit the sacred Thracian place of Perpericon, dated at least 7000-10000 years ago. The same day, up to the time , we’ll visit other interesting spots in the region, including the archaeological museum. Dinner and night at local hotel

Today we travel / 150 km / to the small town of Kazanlak .The town of KAZANLAK and its surroundings. This is the real hearth of the Valley of Thracian Kings. THE TOMB OF KAZANLAK. A beehive-shaped vault built 2400 years ago, with a corridor and two premises. In these chambers are perfectly preserved multicoloured wall-paintings - the best persevered record of the antique Thracian painting found so far on the Balkan Peninsula. The Tomb of Kazanlak is declared a World Heritage Site under the UNESCO's Convention for the Protection of the World Cultural and Natural Heritage. Night at a Kazanlak hotel.

We continue our tour in the Valley of the Thracian rulers. On the afternoon we head / 220 km / North east to the Shoumen town region.Accommodation at local hotel for 3 nights.

Another great day follows. Today we visit two of the ancient Bulgarian capitals Preslav and Pliska. Both towns were built during the reign of the Roman Emperor Constantine the Great. Preslav was the second capital of the independent Bulgarian state 1100 years ago. Impressive stone fortified walls in two belts with gateways and turrets, the memorable Golden Church and palaces of Bulgarian rulers. Pliska was the first such capital, some 200 years before Preslav. It was also the biggest early medieval fortress on the Balkan Peninsula (apart from one in Constantinopol) built on an area of 28 sq. km! Walls with gateways and turrets are preserved as well as two of the palaces of the ruling princes, public and residential buildings, churches with the biggest one in the medieval world - the Big Basilica. In the afternoon a visit to the Svestari tomb follows. There we can see many Thracian mounds as well as the biggest and most impressive Thracian tomb-temple in North Bulgaria, the only one having internal plastic decoration. In the central chamber there are 10 sculptural figures of caryatids who support the arch with their raised arms. The area has been an important centre for the rulers of the Thracian tribe Gheti 2500 years ago. As we think that we’ll have shortage of time to see all interesting spots we preview another day in the region. Night at a Shumen hotel .

Today we continue our tour in Shoumen town region, because one day is not enough to see the most interesting spots in the region. Night at Shoumen hotel.Transfer /230 km/ to Etara open-air museum (near the town of Gabrovo) with a stop at the historical town of Veliko Tarnovo (an old capital of Bulgaria). After leaving Veliko Tarnovo in the afternoon, we head south for the open-air museum of Etara. We will spend 2 nights at the Etara hotel built in the traditional Bulgarian architectural style. The restaurant offers Bulgarian national dishes and drinks. At the open-air museum those interested can have a look at our old Bulgarian crafts and buy typical Bulgarian souvenirs Night at the Etara hotel.

After the breakfast we visit the open air museum. About lunch time we drive / 200 km / back to Sofia,where our tour is over.


Bulgaria is one of the most ancient European countries, founded more than 1400 years ago. One of the most ancient civilizations /Thracian / in this world has left an abundance of artifacts and traces in the land of Bulgaria. Some of the recent Thracian finds are dated at more than 6000 years B.C. Our ancestors, the Thracians, have left innumerable artifacts, temples, shrines, treasures. Along with these unique finds every tourist can become familiar with the newer Bulgarian history and traditions and even taste some of the extraordinarily savory Bulgarian dishes and wines.

Daily temperatures are almost always above 20C. Rainfalls possible, but as a whole it is a fair, sunny and steady weather. Depressions occur very rarely and then temperatures fall down to 15C