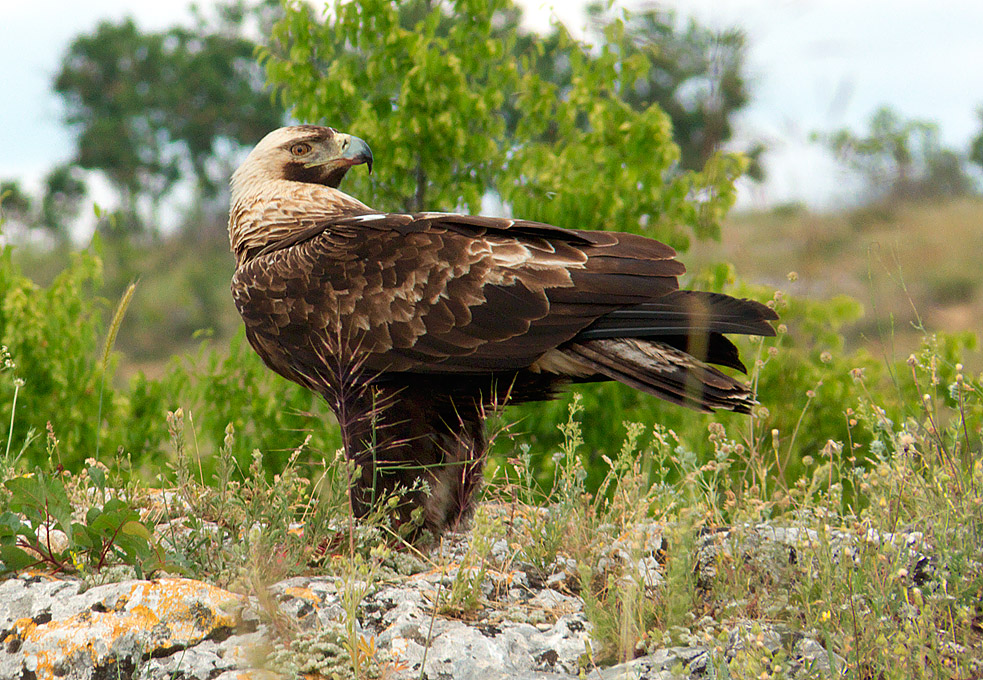 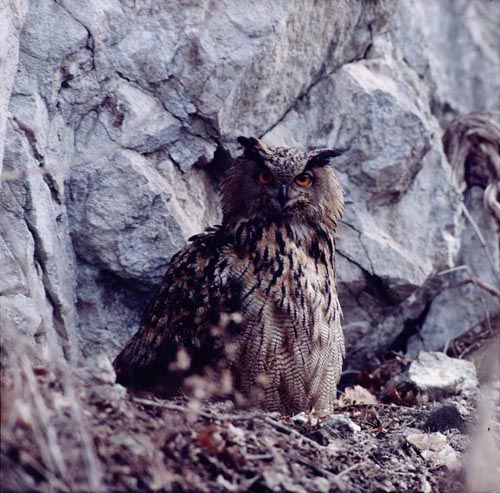 Landing at Sofia Airport. The van with our driver and the guide will be waiting for us at the airport and from there we will head directly for the south-east, towards Rodopi Mountains. We will have several breaks to relax and rest a bit and have a look at the first representatives of Bulgarian bird-fauna, namely Red-backed Shrike, Black-headed Bunting, White Stork, Honey Buzzard, etc. At dusk we will be arriving in the Central Rodopi Mountains where we will put up in a small family hotel in Trigrad village.

After breakfast we'll pack up and head for a magnificent Trigrad gorge. Strange trees of a local subspecies of Black Pine (Pinus nigra) grow right out of the rocks where there is no soil for their roots. All the time while we are there, we cannot help but stand in awe before the nature’s grandeur. Unfortunately, this is only a poor and sketchy description of this extraordinary place with its caverns and the rumble of its waterfalls. One can hardly imagine the gorge beauty if one does not see it with one's own eyes. This exceptionally beautiful area is 1200 m above sea level. WELCOME TO THE LAND OF THE WALLCREEPER. This is simply the best and the most accessible place in Europe or maybe in the world to see this marvellous bird which reminds an enormous butterfly in flight. It is here where after a short and easy walk along the road for about 2 km that we hope to see this wonderful bird. After lunch in the local mountain hut, we will travel to the next main stop of the trip. The road is not long but it’s very “slow”, because we are in the Rodopi Mountains. You will notice with amazement how kilometer after kilometer the mountain changes, the coniferous forests are replaced by mixed ones and afterwards by pure deciduous stands, and the trees become smaller and stunted. Then come the shrubs followed by bare rocky hills and finally the huge cliffs. The world of the large birds of prey lies before us. Night at local hotel in Krumovgrad town. There are good opportunities to watch Black and White Storks, Spanish Sparrow, Lesser Grey Shrike, Red-rumped Swallow , Scops Owl.

The next visit is to a rocky region close to our hotel . The area is of ancient volcanic origin with stony ground, huge rocks scattered around, small stunted shrubs and almost complete lack of wild-growing mature trees. This part of the Rodopi Mountains is well known as one of Europe’s most important regions for birds of prey. We will spend all day birdwatching around and hopefully will see Golden, Imperial, Booted and Short-toed Eagles, Long-legged Buzzard, Black, Egyptian and Griffon Vultures and many species of smaller birds like Pallid Swift, Rock Nuthatch, Rock and Blue Rock Thrushes, Roller, Bee-eater, Red-rumped Swallow, Lesser Grey and Woodchat Shrikes, Sombre Tit, Cirl-, Black-headed- and Ortolan Buntings, Barred-, Subalpine-, Sardinian- and Orphean Warblers.

Long but necessary transfer follows, this time to the lowlands along the Bulgarian Black Sea coast. We will stay for 2 nights at a local hotel in Pomorie town , situated almost on the beach, and close to the local lakes. This is the most important area in Bulgaria for large and small migrating birds from the huge region of Central and Eastern Europe during the spring and autumn migration. While on the move we will have plenty of time for stops to look for specialties like Imperial eagle , Masked Shrike, Olive-tree Warbler, Lesser Spotted Eagle, Montagu’s Harrier.

Before the lunch we will be in the area around the Bourgas lakes (Ramsar and IBA sites ) , with the extensive reed-beds on their lakesides . There are flooded meadows, marshes, low hills, and oak forests in the surrounding countryside. These diverse habitats make this region one of the best in Europe for wetland and other species of birds. There we can spot Pygmy Cormorant, Night-, Squacco-, Purple- and Grey Herons, Little- and Great White Egrets, Spoonbills, Glossy Ibis, White Pelican, Slender-billed-, Mediterranean- and Little Gulls, Avocet, Black-winged Stilt, Somber Tit, Grey-headed and Middle Spotted Woodpeckers, White-tailed Sea Eagle, Lesser Spotted Eagle, Honey Buzzard, Short-toed Eagle. After the packed lunch we’ll visit a Ropotamo reserve , including wetlands, a river and a part of a not very high mountain, with broad-leaved forests, sand dunes and a part of the sea coast. A very good place for watching Woodpeckers, Short-toed Treecreeper, a breading pair of White-tailed Sea Eagles, Honey Buzzard, Booted Eagle.

We head north along the Black Sea coast. The next night we will spend at a local hotel in Kavarna town . Two nice wooded valleys can be seen from the hotel. Very good opportunities to watch Golden Oriole, Bee-eaters, Roller, Syrian Woodpecker, Hobby, Levant Sparrowhawk. On the way north we will stop at oak forest , where we will concentrate on spotting woodpeckers and Semi-collared flycatcher.

After an early breakfast follows a visit to Dourankoulak lake. It’s a very important wetland area for the breeding, migrating and wintering birds with its extensive reed-beds and open-water area. Here we will be most interested to spot Paddyfield Warbler, Collared Pratincole, Pygmy Cormorant, Glossy Ibis, Spoonbill, Ferruginous Duck, Gull-billed- and Caspian Terns, Red-footed Falcon, Long-legged Buzzard. After the packed lunch we’ll visit Kaliakra steppe reserve region. This is a coastal headland. Its white and reddish cliffs descend precipitously into the depths of the sea from a height of over 200 m. Inland, the sky above the rolling steppe is dotted with slow-flapping Calandra- and Short-toed Larks. The habitat also suits Isabeline- and Pied Wheatears and Stone curlew. Almost everywhere, perched on small shrubs we can see Lesser Grey- and Red-backed Shrikes, Black-headed- and Corn Buntings. This is also the region where sometimes the Rose-coloured Starlings appear during their periodic invasions. About 4 p.m. we drive inland and will cross Dobrudza steppes to reach the Danube river valley. Accommodation for 2 nights at Pelican Birding Lodge, situated in Vetren village, Silistra town district.

Today we will visit the managed reserve lake Srebarna. Srebarna is under the aegis of UNESCO as a Monument of the World Cultural and Natural Heritage. Its extensive reed-beds give perfect shelter for globally threatened with extinction Dalmatian Pelican, Ferruginous duck, Pygmy cormorant and a number of other more or less rare birds like Red-necked- and Black-necked Grebes, Purple-, Squacco- and Night Herons, Marsh Harrier, Penduline Tit to breed. The Lesser Spotted Eagle, Levant Sparrowhawk, Goshawk breed in the broad-leaved forests around the lakes. The Ruddy Shellduck also breeds in the banks of the small dry valleys around the lakes.

Driving west along the Danube we’ll visit the Каlimok marshland. Initially, the area was a typical Danube riverside marsh, then it was turned into a fish farm during the communist regime, and today it is a partially restored marshland again. A good place for watching Whiskered Tern, White-winged- and Black Terns, Red-necked-, Black-necked-, Little- and Great Crested Grebes, Pygmy Cormorant. After the packed lunch, we head south for the Balkan Range in the afternoon, where we can visit an open-air museum . We will stay overnight at the Etara hotel (built in the traditional Bulgarian architectural style). There is a restaurant at the hotel offering Bulgarian national dishes and drinks. At the open-air museum those interested can have a look at our old Bulgarian crafts and buy some typical Bulgarian souvenirs. Here is one of the last opportunities on this trip to see the Dipper, Somber tit and some more Woodpeckers.

After breakfast we will set off for Sofia where our tour will come to its end. During the trip we will stop for a quick snack in a little roadside snack bar.


Bulgaria, with its biodiversity, is indeed a unique land. Within its borders and during certain periods of the year one can watch at one and the same time both Mediterranean species of birds and birds that nest in the far-away Siberia. We will visit many marshes and lakes, the riversides of the majestic river Danube, and the ancient Black Sea as well as the extremely diverse habitats of Sakar and Rodopi Mountains. Participating in the Spring birdwatching tour you will be able to see both migrating to the north species and species that breed here, in Bulgaria. Birds will be in breeding plumage and some of them do not stop singing even throughout the night. Apart from the beautifully looking Golden Oriole, Bee-Eater, Roller, Hoopoe, Wallcreeper we expect to see such rare European species like Dalmatian and White Pelicans, Black and White Storks, Pygmy Cormorant, Ruddy Shelduck, Ferruginous Duck, all species of European Herons, Egrets and Bitterns (except the Cattle egret), many species of Waders and Plovers, Black- and White-winged Terns. Also, large birds of prey like the Eastern Imperial Eagle, Golden Eagle, Lesser Spotted Eagle, Short-toed Eagle, Booted Eagle, White-tailed Sea Eagle, Long-legged Buzzard, Honey Buzzard, Levant Sparrowhawk, Woodpeckers, Masked Shrike, Red-backed Shrike, Lesser Grey Shrike and Woodchat Shrike, Sombre Tit, the Rock , Black-headed and Ortolan Buntings , Isabeline and Pied Wheatears, Olive-tree and Paddifield Warblers, Semi-collared Flycatcher, Motacilla feldegg or Balkan Black-headed Yellow Wagtail and many, many others. To put it otherwise, we will see about, and more likely more, than 200 species of birds. During the entire tour conditions for taking pictures of species from the flora and fauna of the country will be good enough.

Daily temperatures are almost always above 18C. Rainfalls possible, but as a whole it is a fair, sunny and steady weather. Depressions occur very rarely and then temperatures fall down to 8-10C.

Payment may be made in all convertible currencies at the Euro exchange rate for the day of payment. The prices include : All the ground transport, FB – full board with packed lunches, where is necessary, accommodation in hotels and guest houses. English speaking guide, All the taxes for reserves.